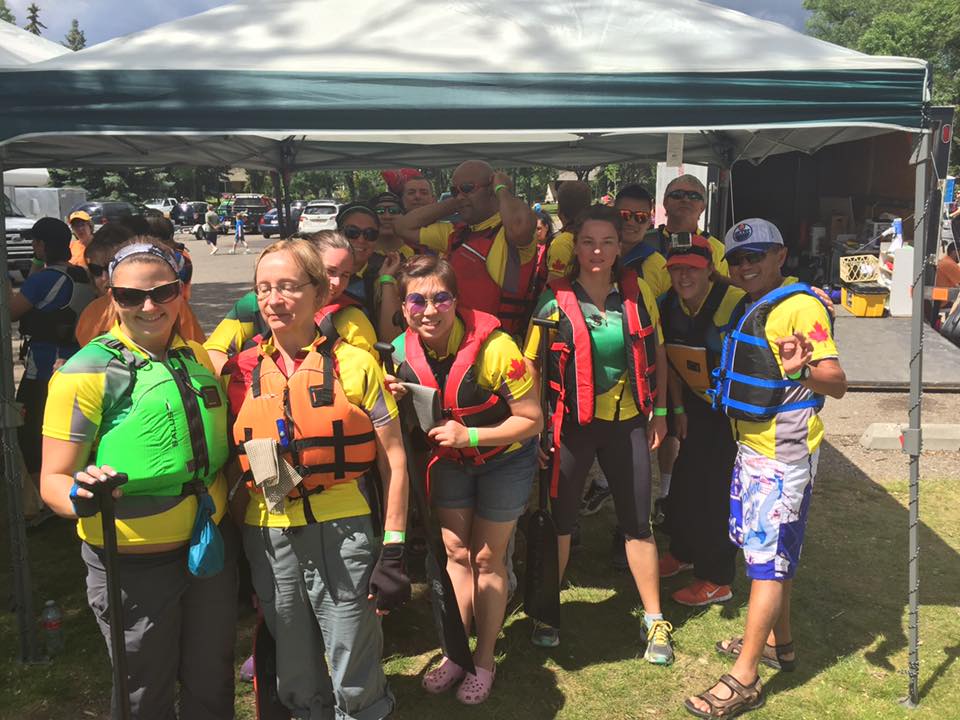 The Lethbridge dragon boat festival was a great success for OCC this year. Having been away from the festival the year previous, the club was excited to be back and eager to perform. Powered by our core of amazing VI (visually impaired) paddlers, OCC Dragon Sight, raced hard and was proud to challenge for a medal in the Mixed B finals! The finish was incredibly close! OCC Dragon Sight finished 4th with less than 2 seconds of separation from 2nd place and just over 2 seconds out of 1st place. So close! 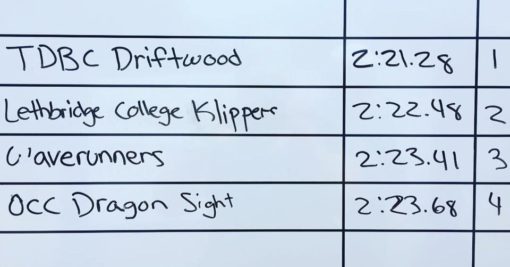 For the open competition, OCC was joined by paddlers from Dragnum and the Raunchy Roadents, and despite starting at the back, surged to claim 2nd overall.

In the 2 km challenge OCC powered their way to 4th despite some scary brushes with tipping the boat in the turns.

OCC also was pleased to be able support the Blazing Paddles women’s team with some of our fantastic female paddlers!

Overall it was a fantastic weekend. A huge thank you to you all those that supported us on and off the boat!

And a huge thank you to the Lethbridge dragon boat festival staff! 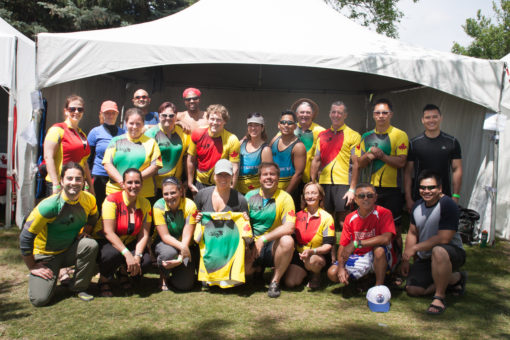 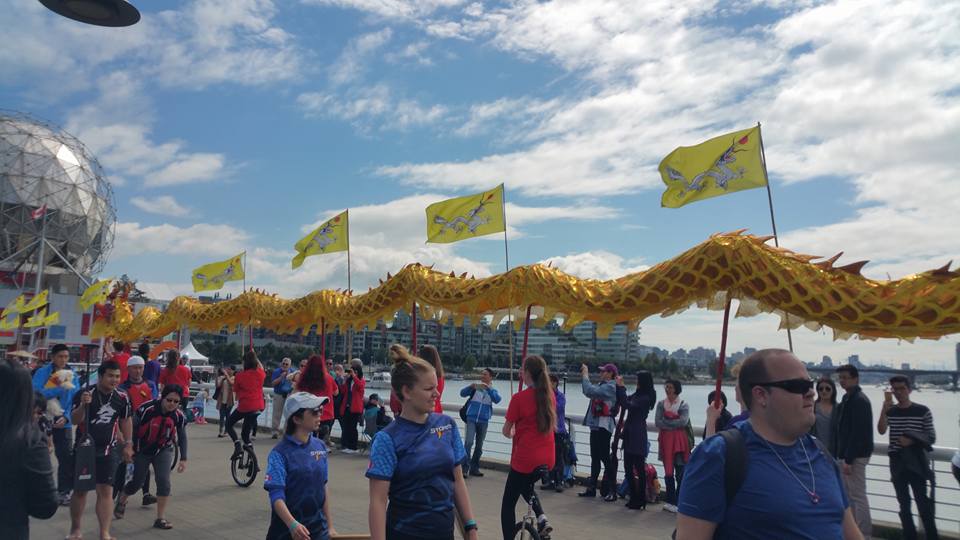 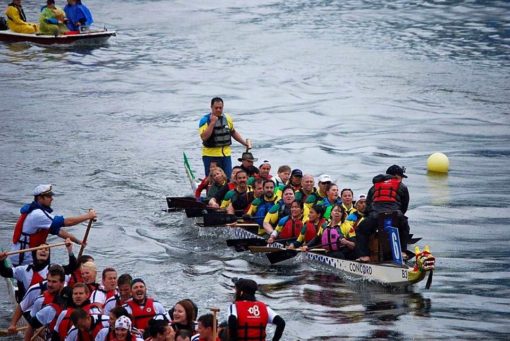 This experience would have not been possible without the support and participation of our guest paddlers and steer from Regina, Calgary, and Vancouver. A huge thank you to you all!

And a huge thank you to our host team the Dreadnought Dragon Boat Team! Your warm welcome and hospitality are true examples of the sportsmanship and camaraderie within the dragon boat community!

Looking forward to racing with you all next year!

Join us at the MEC Edmonton Paddlefest on June 5 at Telford Lake (Leduc) from 10 am to 4 pm. OCC will be demoing the sport of dragon boating for inquisitive new paddlers.

In these unique clinics, participants will paddle with and be coached by resident experts. 16 paddlers per session and a fun way to make friends and have a great workout on the water!

OCC is officially on the water for the 2016 season! Our open house today marked our first excursion onto our new venue, Kirk Lake. We’ll be practicing out of this location for our Level II & III paddlers starting this Tuesday, May 17th, as we quickly ramp up to participate in the fast approaching Concord Pacific Vancouver Dragon Boat Festival, June 18th & 19th, and the ATB Financial Lethbridge Rotary Dragon Boat Festival, June 24th to 26th.

If you are interested in paddling with OCC this season and for these upcoming festivals, please email the club officers at board@oilcitycrew.ca and we’ll get you out on the water asap!

For more information about the festivals please see the following links:

In The 4 Hour Body, author Tim Ferriss reports that the most effective diet ever invented uses visual images. Researchers at the University of Wisconsin-Madison got 43 subjects to photograph all of their meals or snacks prior to eating.

The results were astonishing. Reports Ferriss: “The researchers concluded that photographs are more effective than written food diaries. This is saying something, as prior studies had confirmed their subjects who use food diaries lose THREE TIMES as much weight as those who don’t.

The photographs acted as an instantaneous intervention and forced people to consider their choices before the damage was done. In the words of one participant: “‘I was less likely to have a jumbo bag of M&Ms. It curbed my choices. It didn’t alter them completely, but who wants to take a photo of a jumbo bag of M&Ms?‘”

Whether it’s dieting or competing, the truth is that visual images work better than anything else because they give you an EXPERIENCE.

In the case of dieting, you experience yourself making a self-defeating choice.

And, it’s enough to put you off even your jumbo M&Ms.

In sport, visualization works the same way, only in the positive. It gives you a success EXPERIENCE.

Remember, you have a self-image in your mind – a detailed picture of yourself as an athlete.

It’s based on all your past experiences. Your victories, your skills, and your failures.

To improve your athletic self-image and perform with excellence, you need more than positive thinking. You need to EXPERIENCE success.

These success experiences don’t even have to be real to make you believe.

If you imagine an experience in your mind – with EMOTION – as far as your brain is concerned, you have actually HAD this experience.

You don’t need to win Wimbledon to believe you can. You can imagine winning it in your mind’s eye instead.

Going into the 2000 Olympics, diver Laura Wilkinson broke her leg and was in a cast for months. She could not dive.

Instead, several times a day, Wilkinson used visualization to climb the 10 meter platform and “walk” through the motions of her complex high dives.

When Wilkinson’s cast came off, she executed fabulous dives.

Thanks to the power of visualization, she lost very little training time and won the gold medal.

That’s why you need to learn how to harness the power of visualization.

It will make your athletic dreams come true by activating your Great Jock Mind.
Lisa Brown

The Courage To Win 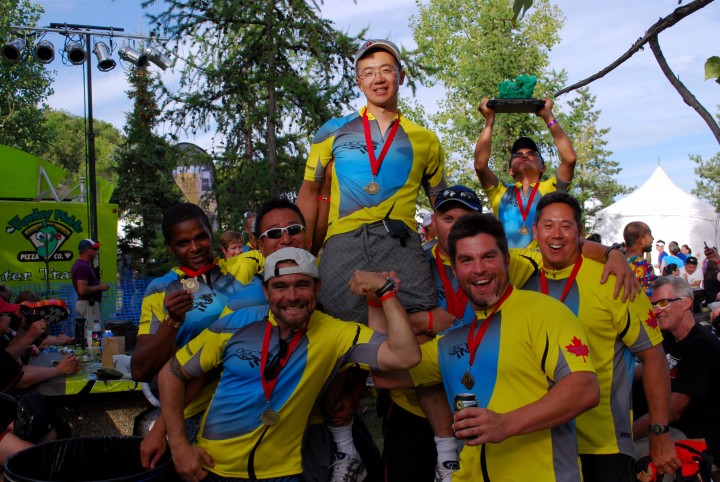 Head Coach Darwin Li has been involved with paddling since 1996.  He has been paddling for over 10 years and coaching for 5.  As a paddler, he has paddled for numerous competitive teams including Crew Yahoo, Lotus Sports Club, CIBC Imperial Dragons, Alcan Team SUCCESS, and the False Creek Racing Canoe Club (FCRCC).  He has also cross-trained in both outrigger canoe and flatwater paddling.  The highlight of his paddling career was in 2004 when he won 1st place in the Canadian Club CrewDragon Boat Championships as a member of FCRCC.

Darwin began coaching competitively in 2004 with RGL United where he led the team to a 4 division improvement and helped them to record their best-ever finishes.  Highlights include 2nd and 3rd place finishes at the Kelowna Dragon Boat Festival and a 2nd place finish at the Taiwanese Dragon Boat Festival in 2007 and 2008.  He also coached the Eye of the Dragon, a visually impaired team, with Dan Hebert.  He was also the novice outrigger coach for FCRCC in 2007.  In 2008 he was hired as the Dragon Boat Coach for the Vancouver Ocean Sports club.  Upon returning to his childhood hometown of Edmonton, Alberta, he coached the newly formed Oil City Crew dragon boat team to 2nd place at the Vernon Dragon Boat Festival, 1st Place at the Edmonton Dragon Boat Festival in 2009 and 2011, and 14th place at National’s in the toughest field in Canadian dragon boat history.  Three of his paddlers have previously been selected for Team Canada, of whom two became world champions.

In the local scene, he has run two paddling clinics for paddlers in the Edmonton area.  He has also completed Parts A and B of the National Coaching Certification Program.

Having paddled competitively in the coaching-rich waters of the BC Lower Mainland, Darwin sought out and was privileged to have been coached by some of the top coaches in the world including:

As an administrator, Darwin chairs the Development of Dragon Boat in Western Canada Committee (DDBWC).  This committee was created by and operates under Dragon Boat Canada and has been tasked with studying the present state of dragonboat, identifying problems, finding ways to improve the sport, and enacting solutions where possible.  The DDBWC operates in BC, Alberta, Saskatchewan, and Manitoba.

Come out for a night of fun and see what the sport is all about.

No commitment necessary other than to have fun in a boat. 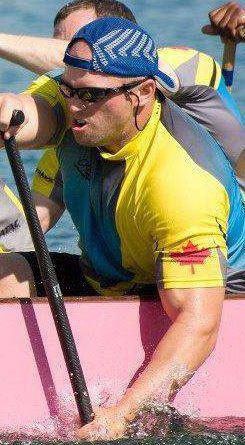 Donald Shand started dragon boating when, due to an injury, his plans of competing in an international bench press competition in 2009 ended. He was introduced to the sport and instantly fell in love. Being that Don possesses a competitive nature he pursued the goal to once again compete at a National level when he found OCC.

Don tried out and made OCC’s premiere team and went on to compete in Nationals in Welland Ontario. With the growth of OCC Don became an active mentor due to his experience and natural ability to invest in others finding himself coach for the Wriver Wreckers in 2014.

This turned out to be a transitional and challenging year in OCC as members were in Italy competing in Club Crew Worlds. Don, with the assistance of head coach Darwin Li are to both be commended for pulling together the resources within the club by combining it’s forces within all divisions of paddlers sighted and visually impaired where they went on to finish 2nd overall at Edmonton festival and were gold medalists in the mixed B final in Calgary.

Proof once again of the brand of excellence of both the coaching and paddlers of the Oil City Crew Don is proud to be part of today.

Don is currently coaching the recreation team (that endorses the true competitive nature of the Oil City Crew) Wriver Wreckers. But he never forgets his roots and claim to success in the sport from coach and friend, Darwin Li. 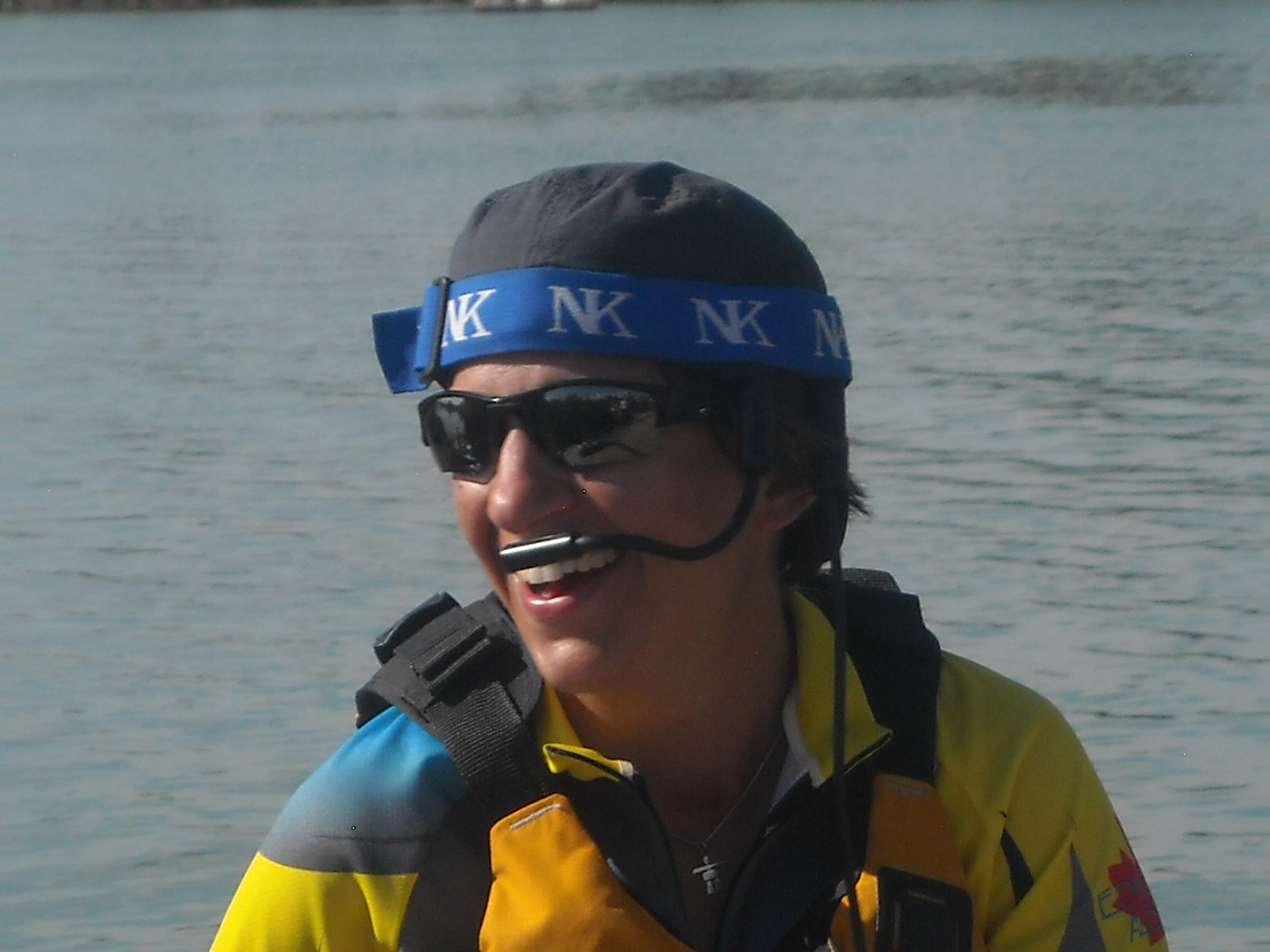 This was the review of OCC’s former president Heidi Knupp as she resigned in 2014.

2014 marks the end of my tenure as President – and it is with pride that I look back on the growth OCC has made over the past two years.

One thing that stands out is the growth and development of Dragon Sight, which I am proud to have founded with Darwin Li & Terry Schmolke, and introducing long time paddler Donna Peters to the role off steers person!

2014 saw OCCDBC continuing with our partnership with Prairie Dragons Paddling club, with our competitive crew & Dragon Sight focusing the year on preparing for the Club Crew World Championships in Italy. Working towards that goal saw our club continue to show our strength.

In Lethbridge our Senior A and Senior B teams finished 3rd and 5th respectively. Lethbridge also marked the first out of town Festival for Dragon Sight – where they clearly demonstrated they were ready for Worlds, finishing 23rd out of 43.

We also did very well at the Calgary Festival, with our Senior B team finishing 4th overall and the Senior A team finishing 6th. The Weed Wackers also joined us in Calgary – showing the depth our of club and finishing 1st in the mixed B final, coming in 11th overall.

The Edmonton Festival this year demonstrated camaraderie between our members, both past and present.

Our competitive team reached out to past-OCC members and friends, who then competed together under the OCC name – taking home the Silver Medal in the mixed division in what was quite possibly the fastest heat of the Festival, with all three teams finishing with sub-2 minute times.

We also entered a Women’s team for the first time, making OCC history, with the Swamp Sirens finishing 2nd in the Women’s division behind Edmonton`s veteran women`s team – SCS Phoenix.

The Wriver Wreckers also showed the strength of our club, posting strong times and finishing the festival in 15th

And we can’t forget about Dragon Sight – who finished 7th overall by Winning GOLD in the Borealis Division.

The year ended with a bang at the World Championships in Italy – where we showed the World that Alberta, and the Prairies, is home to some awesome paddlers.

Dragon Sight made history taking home the GOLD in the 200 m, and was less than 1 second behind in both the 500 m and 2km. The Women’s crew came in 4th in the 500 m, under a second out of a medal, and the 2km, and 7th in the 200 m, with our Senior A and Senior B teams both posting respectable times.

Looking back on my time as President I can’t help to think – wow – what a legacy. Team records were broken and history was made. I have each and every one of you to thank for helping with the creation of that legacy. As my time as President comes to a close, I want to end by saying – thank you – and with my heartfelt wishes for 2015. 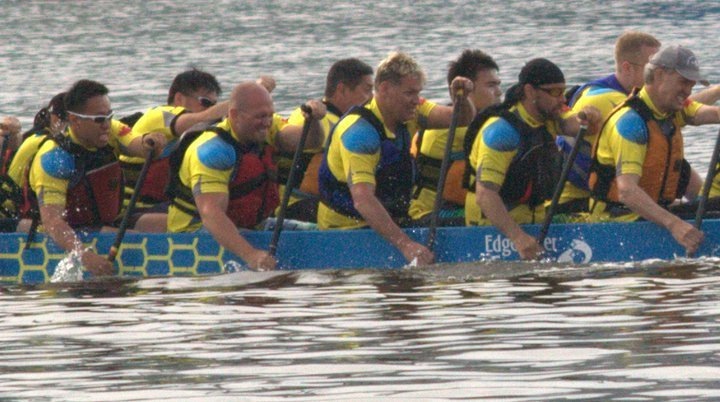